"SPAMALOT is an irreverent musical of the legend of King Arthur’s (played to perfection by Jonah D. Winston)  quest for the Holy Grail."
- Spamalot, Mercury Theatre - Alan Bresloff, Around the Town Chicago

"When Mary Phagen is found in the pencil factory’s basement by the black janitor, Newt Lee (exceptional work by Jonah D. Winston)..."
"...who have seen their own people subjected to injustice for generations (with no intervention) burst into the bitterly sardonic “Rumblin’ and a Rollin'”(sung with feverish intensity by Winston)."
- Parade, Writers Theatre - Hedy Weiss, Chicago Sun Times

"They then did 'Stars' from Les Miz (Jonah knocked it out of the park)...'Make Them Hear You' as done by Jonah who has a wide range and uses it to perfection..."
- Iconic: A Broadway Hits Cabaret, Oil Lamp Theater - Julia W. Rath, Around the Town Chicago

"As Little John, the physically imposing Jonah D. Winston got laughs on his entrance and got more and more guffaws as the show developed."
- Ken Ludwig's Sherwood, Cleveland Playhouse - Roy Berko, Cool Cleveland

"Jonah D. Winston [was a] delight...as male Kory, serving as a traditional Greek chorus to set the story and move the plot along with incisive observations and posturing as statuary that become involved in the action and outcome."
- Lysistrata, Sapphire Theatre Company - Rita Kohn, NUVO, 4 Stars

"In the royal roles of King Azaz and the Mathemagician, Jonah Winston employs his infamous vocal power, with belly laughs that would put even Santa Claus to shame."
- The Phantom Tollbooth, NoExit Theatre Company - Katelyn Coyne, FunCityFinder.com

Photo by Michael Hosp
"I saw this intense, hip-hop poetry/philosophy theatre piece last weekend and loved it because it made me weep and think. It is based on the poetry of Saul Williams and directed by Michael Hosp. It is beautifully performed by Jonah Winston. I wish I had time to see it again!"
- Hope Baugh, www.IndyTheatreHabit.com

"Twilight Productions recommends Diaspora (Half/Black Productions), at IndyFringe through next weekend. If you think of Garrison Keillor performing poetry and want to die, then go see Jonah D. Winston performing the poetry of Saul Williams. Resurrection guaranteed! A mesmerizing, often funny performance that is at once heart warming and heartbreaking."
- Amy Pettinella, Twilight Productions

"[This production] opens with the nameless homeless man (brought to life with varying degrees of pathos and satirical humour by the excellent and captivating Winston) sitting motionless at centre-stage with a cup of change and a familiar cardboard sign at his feet. This image, coupled with the distant sound of police sirens, immediately draws the audience (especially those who arrive early) into the same level of discomfort that relatively well-off, ingrained members of society feel when confronted with the words "spare some change?....From then on, unlike in real life, the audience becomes captive to the man's seeming ramble, which, over the course of one hour, powerfully transforms itself into a narrative painting both a picture of his tragic history and his life's long-lost dreams and ambitions. One of the production's finer qualities is its ability to cycle through such a powerful and, let's face it, revealing monologue without neglecting the necessity of humour (again, injected instinctively by Winston), while keeping the audience in suspense at the same time."
- Laurence Brown, King Of Indiana

From the "You Review It" section of Indianapolis Business Journal: 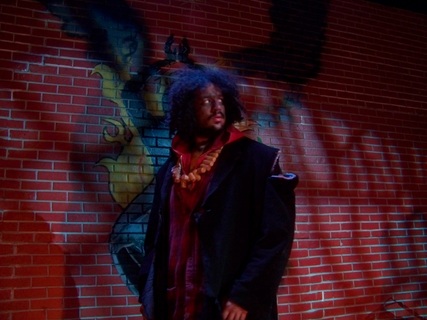 Photo by Michael Hosp
"It has an emotional arc rather than a storytelling arc, I think, if that makes sense, but it is also more than just a performance of several hip-hop poems put together. The other theatrical elements - set, sound, lighting, costuming - plus the nuances in the portrayal by the solo actor, Jonah Winston, all combine to make you feel as if you are truly hanging out with a drunk/shamanic homeless/guru guy for an hour or so. It is both scary and inspiring, a very satisfying hour of performance art.
Diaspora-a must see."
- Hope Baugh

"I attended the Friday night performance of Saul Williams 'diaspora' directed by Michael Hosp. This adaptation of Williams play is powerful, stirring and very thought provoking. From the very moment you enter the theater and see the single character "Man" played brilliantly by Jonah Winston, sitting on his bucket you are challenged to acknowledge his existence. I can't tell you how many times I walked by such a character during my youth in the NYC area. The play begins with Man, a schizophrenic homeless man trapped in the far reaches of his inner mind begging for money as well as acknowledge of his existence. Man is desperately trying to find himself and how he got where he is. The audience is taken on a the journey through this very trouble mind and learns along the way the many torments in the life of this broken and shattered Man. The journey is not linear but fragmented like the mind and soul of Man. What would appear to any passerby on the street as the rantings of a drunken homeless bum, are really the revelations and glimpses to the heart of an individual who was not just broken but shattered by the the torments of his life. Man desperately is seeking acknowledgement of himself from anyone who passes by while searching his inner core for his own identity. You learn of the racially motivated rapping of the girl he loved, who he found left for dead along the river, of his haunting of his ancestry brought to this country as a slaves. As Man share his torturous past with the audience, you find a mind that is not only tortured but full of wisdom and insight to the nature of all of us. The staging and lighting drew the audience into the darkness of Man's mind and the bits of light and wisdom that he shared with the audience. This play challenges the audience not only to look deeper into the soul of man, but to also look deeper into their own soul. Jonah's performance of man is absolutely brilliant and awe inspiring. If you like the type of theater that is shallow and bright this play is not for you, but if you are one who willing to go on the Journey with Man (Jonah)you will discover a deeper side of your soul.  I highly recommend this show"
- Peggy Coyne 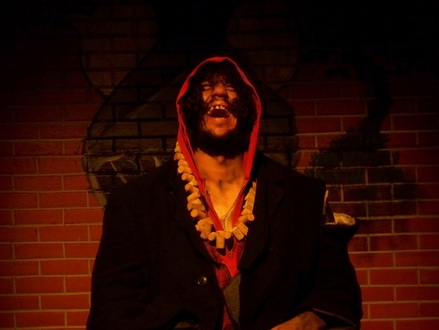 Photo by Michael Hosp
"diaspora is more than a poetry reading—it is a powerhouse performance tapestry that is dynamic, urbane, playful, heartbreaking, and above all thought provoking. The success of this piece lies not only with the brilliant script but with the exhilarating performance of Jonah Winston, a professional Indianapolis-based actor and singer. You get the sense that he actually lived the life of the homeless schizophrenic he portrays and penned the words himself. But its greatest asset was bringing a sense of humanity—both despair and joy—to the plight of the displaced, disenfranchised, but definitely not (in this case) disaffected mentally ill. A delight from start to finish, the show is punctuated by peaks and valleys of emotions and ideas. Add to that a simple yet fantastic lighting scheme and soundtrack, and you have not only an intellectual experience, but a visceral one as well."
- User "RJK" IndinaAuditions.com
Contact: winston.jonah@gmail.com